Identifying and trading the wedge chart pattern helps traders to spot trend reversals or trend continuation. They also allow us to anticipate a price profit target as well as new support or resistance areas. 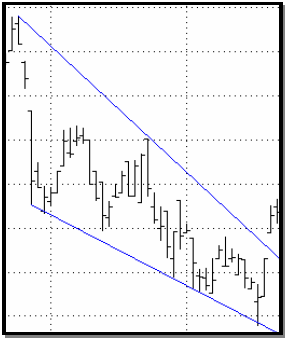 In above chart we see both support and resistance lines converging toward each other. You will also notice that as the price action moves further into the wedge, the range of price movement between support and resistance is constantly reduced. As the constriction takes hold, it no longer becomes profitable for directional traders to enter directional positions within this pattern.

Another typical feature of wedge chart patterns is, that the further the price action drives into the apex, the more the trading volume for the stock will begin to decline. Before this happens however, it's not uncommon to have previously identified the price action as a channel.

A good channel pattern can be traded both upwards and downwards but as the saying goes "all good things must come to an end". If you're well into the channel - and particularly if it has formed 5 or more 'waves' in true Elliott Wave fashion, then you may notice that the peaks and troughs are now converging together. This is a warning sign that at some point in the near future, the channel will either continue, or more likely, break down.

When we have a falling wedge chart pattern, the falls of the share price when bouncing off the upper trend line will offer better option trading opportunities for a while because they are in harmony with the overall trend, while the upward price action will see increasingly less probability of success because the overall momentum of the price action is still downwards. 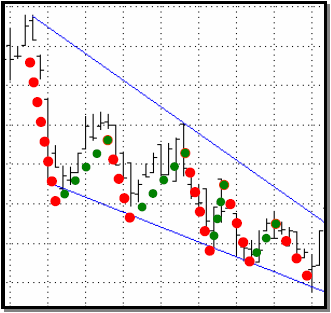 Looking at the image above, you'll notice the trading area indicated by red dots will typically have higher volume and consequently, trading put options or short selling will be more profitable.

Trading in the opposite direction, indicated by the green dots, will usually have a reduced level of volume. This is primarily due to the well known fact that a falling share price will have less volume on the pull backs and more on the runs.

The only time you are likely to notice an increase in volume for the upward price action, is when a breakout is in preparation. Falling wedge patterns have a habit of breaking out in an upwards direction and increased volume on the up-swings is our warning signal.

It has been put this way: "A wedge has a habit of breaking out towards the steeper side". When examining this statement it is apparent that the "steeper side" for a falling wedge chart pattern is the upper side, or resistance line. In our first image above, the price action did exactly that - it broke out to the upside.

When a valid breakout occurs you will see an increase in volume and this provides reassurance that it stands a chance of continuing in the short term. This brings us to the behavior of the wedge pattern when it does decide to break out. A wedge does have the tendency of re-testing the line it has just breached prior to going for a run.

Please remember that "tendency" does not mean "every time". So if you only try to trade wedges after the retest, you may miss some moves. Nevertheless, this is a more conservative trading style. It is true that some money will be "left on the table" but entering after the re-test increases the odds of success more than  simply entering on the breach.

Another point worth noting is that the wedge chart pattern will usually reverse the direction of the trend. With a falling wedge, the trend has changed once the price action has been breached and closed above the level of the last peak.

If you're trading the re-test, make sure that this trough is also higher than the final trough before the breach, so that you now have a higher low and a higher high. This is your first sign of the new trend and is illustrated in the image below. 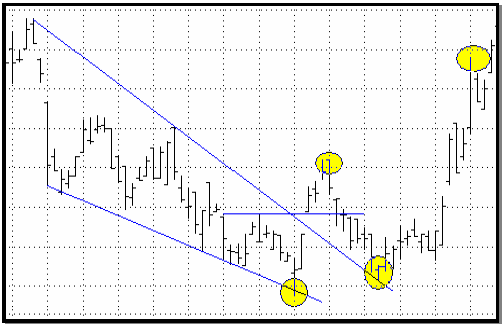 Is it possible to calculate a price profit target once a breakout from the wedge has occurred? Yes, it is possible and it is as simple as calculating the distance between the first opposite touch within the wedge and the opposite trend line. Once calculated, you simply place it on the breakout point, as illustrated in the image below. 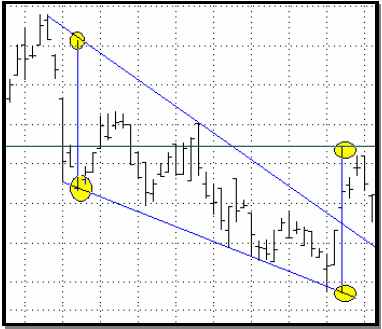 Looking at the illustration, we can see that the breakout almost made the target. Another thing to note, is that this target can become another point of resistance and force the price action back down if the move was too weak.

In our illustrations above this is exactly what happened until the stock managed to gain enough strength, following the re-test, to break up through the resistance level.

It needs to be understood that measuring the potential price target is just that - the "potential" and is not absolute.

There a many similarities between the rising wedge and the falling wedge chart patterns. Both patterns have resistance and support lines which converge towards the apex. As with the falling wedge, it is just as possible to calculate the potential price target following a breakout -  and like any wedge, it may re-test the breached line prior to continuing the reversal. 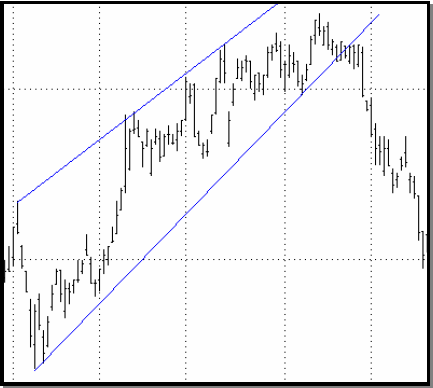 In our sample chart above, we can see that the price action broke out across the steeper line. With this knowledge, we can closely follow a stock once it has move into a wedge pattern and is being squeezed together. We just wait for the breach and jump on board for the winning side.

An important point for options traders to remember is, that the potential price target is exactly that, so don't be tempted to buy out-of-the-money option contracts simply because the price target is around that level. This form of trading could take you out very quickly should the stock turn and not reach the target. 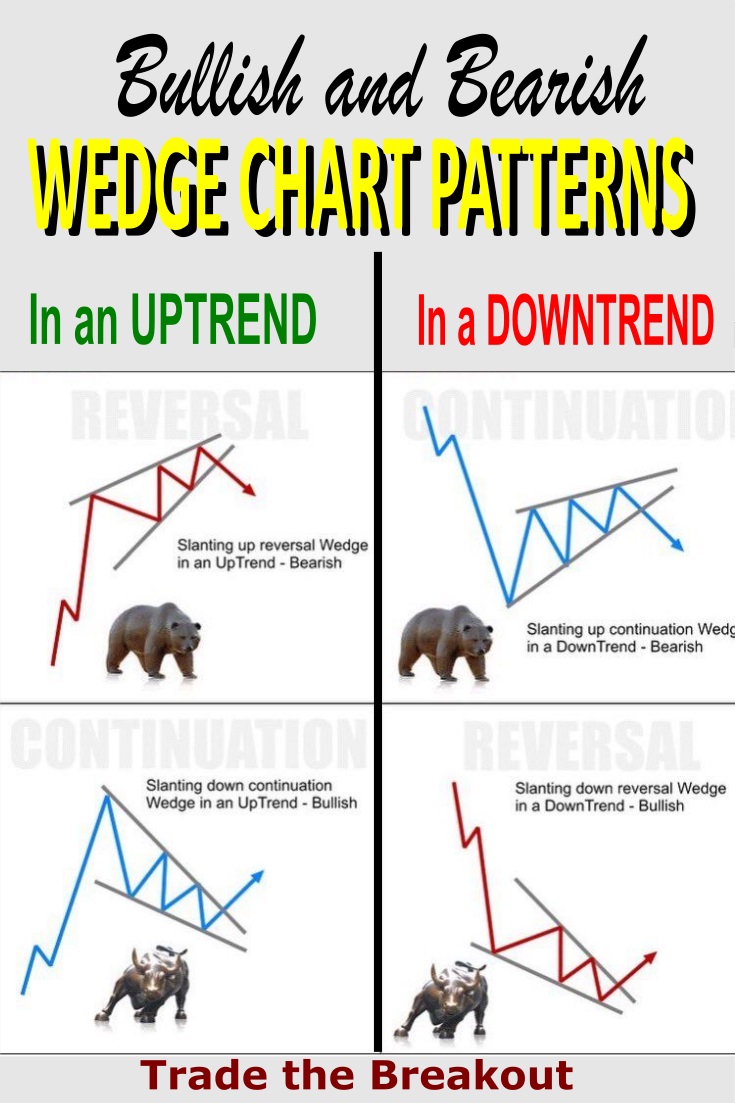