Trading channel chart patterns would have to be one of the easiest technical analysis techniques to implement - and the good news is, that on average, most financial instruments will channel at least 20 percent of the time. In fact, rather than drawing trend lines on your chart, the first choice should always be to look for a channel and if that isn't there, then settle for a trendline.

Channel pattern trading can be a very powerful ally when using the leverage that comes with options. The nice thing is, that using options you can trade both ways - up or down. But there are a few things to be aware of. Taking heed to these will potentially save many losing trades.

Sideways channeling stocks can present themselves at any time, but more often than not, they precede a major shift in direction, such as a swing from a bull to a bear market, or vice versa. This being the case, it is important to remember that at some point, every channel pattern will end and recognizing the signs in advance will prevent bad trading decisions. It also means that identifying a channel as early as possible allows you to take advantage of them before they end.

Below, you'll see a chart of BHP where we illustrate how all three channel patterns present themselves. If you look at the notes on the chart, you'll also observe some warning signals that the channel was about to end. 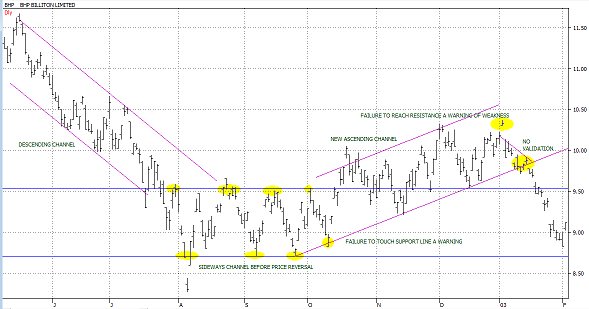 We can see from the above chart that channel pattern trading is based on identifying two parallel lines. To the left of the chart we see a descending channel. This is followed by a sideways channel that precedes a price action reversal so that the stock now trends north into an ascending channel pattern. As the ascending pattern begins to fail, the warning signal presents itself when the last high point fails to reach the top of the channel. It warns of weakness, which is confirmed when to the right of the chart, the price fails to bounce off the lower trendline and breaches it instead, plummeting down to around the same levels as the bottom of the previous sideways channel.

Notice also, the warning signal at the end of the sideways channel. The final price trough failed to reach the horizontal support line, warning of possible weakness. Sure enough, it thrust through the upper resistance level and continued north, then pulled back and forth a few times to form a flag pattern before moving north again.

One of the worst mistakes a trader can make, is entering a position which anticipates a bounce off a channel support or resistance line. You must always, ALWAYS wait for validation. What do we mean by validation? If you look to the far right of the chart, an example of failed validation is given. Validation is a price move which breaches the short term trendline that you would draw within the channel. It should preferably be accompanied by supporting volume and a nice bullish or bearish bar or candle. This validates the short term price reversal and provides an entry signal you can be confident about.

You may have heard the expression "the trend is your friend". This applies just as much with channel pattern trading as it does with swing trading. In fact, trading ascending and descending channels are just another form of swing trading, only the price moves more defined. When trading an ascending channel, it is always safest to only trade validated reversals from the troughs. Trading reversals from the peaks means going against the trend and carries more risk. The reverse applies to descending channels. But all the while you must be on the lookout for potential reversals because you know that all channels end at some point.

Some aggressive traders may try to trade minor swings in the market, but this is not recommended for beginners. If you are new at this, only trade with the trend.

When drawing your upper and lower trendlines, you don't need to strictly adhere to the highest and lowest points. The most valid trendlines are those that have the most "touches" of peaks or troughs. You'll notice for example, that in the new ascending channel to the right of our chart above, that we ignored the first high point because there were more "touches" in the price consolidation area just below it. On the other hand, if you have to "force" your channel to appear by drawing strange lines, you are probably working too hard and looking for something that doesn't exist.

Some very successful options traders I know of will only do channel pattern trading and nothing else because they consider them high probability trades. You trade put options in a downward channel and call options in an upward price channel. When choosing your options strike prices, you should prefer in-the-money options with a high delta. You should also know how to interpret the volume bars on your chart. The reasons for this are explained more fully in the popular Winning Trade System developed by veteran trader, David Vallieres. His method is the most cost effective way to trade because it minimizes brokerage costs while providing a strong buffer should the price action go against you.