The Three Legged Box Spread is one of the best option trading strategies available for retail investors today. Whether you only have a few thousand dollars or a large sum to invest, according to well known veteran trader David Vallieres, this one is the best. The appealing thing about it is, that it's execution is easy while it’s results are reliable and consistent.

We would call the three legged box spread a "lifestyle" type trade, meaning that you don't have to keep watching the market for most of the day. It’s the type of setup which, once entered, only requires monitoring a few times a week in conjunction with setting up an alert with your broker as to when a target price in your underlying instrument has been reached.

It's not a day trading, nor a high frequency trading system. Nor is it about scalping, or forex trading, or binary options. You could almost call it the perfect option strategy.

Some Benefits of the Three Legged Box Spread

Whatever kind of option strategy you choose, you should always be aware of what kind of market you're in. This is critical. Take the very popular and advanced Trading Pro System course for example. The ideal time to place the kind of “monthly income” trades recommended there, is when the VIX (volatility index) is at 40 and coming down. At such times you have inflated option premium in the market, which provides selling opportunities.

But with the three legged box spread, it doesn't matter what kind of option volatility market you're in. It could be high (VIX above 40) or low (VIX below 20) or in between and this type of trade works just as well in any.

If you specialize in one chosen trading style, you will make a lot more money than if you're trying different things all the time. This is because you'll perfect your technique and know a lot about your strategy. The three legged box spread is one of the best strategies to become familiar with because it has unlimited profits to the upside with very limited risk to the downside.

You have to treat this like a business and this means an expectation of a profit. Studying volatility and understanding what kind of market you're in, or about to enter, increases your winning percentages of profitability. If you want to be in the top 2 percent of traders then you have to understand this.

Before we can talk about a three legged box spread, we first need to understand what a regular Box Spread is. It's a trade that has 4 option 'legs' at two different strike prices which, if purchased for less than the difference between the strike prices, gives you a guaranteed profit.

So let's break down a box spread into its components, with the added feature of the options delta. 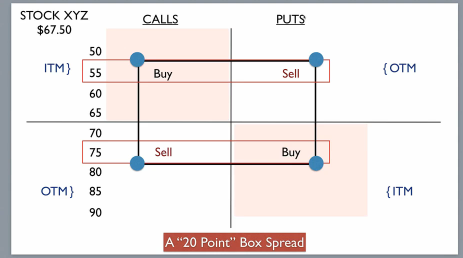 Looking at the graph above, with the underlying stock currently trading at $67.50, the 55 calls would be in-the-money (ITM) while the puts would be out-of-the-money (OTM). This being the case, we can speculate that the delta on the call options would be about .89 while the puts, being OTM, would have a delta of .11.Adding the two deltas together would give us a combined delta of 1.00.

Now if we were to simultaneously purchase a 55 call and sell a 55 put under these conditions, we would create what is called a "synthetic stock position". It would be much cheaper than buying the underlying stock outright, but in terms of price movement, would produce exactly the same profit or loss, including the associated risk of losing more than our initial trade amount, as if we had owned the underlying stock or bought a futures or CFD contract.

If we were to do the same thing on the 75 calls and puts, per the chart below, we would create what is called a "synthetic short stock position". The effect would be just the same as if we had short-sold the underlying stock covered by the options contracts, instead of using options.

So by creating a regular box spread with just one contract for each leg, we achieve the same thing as if we had purchased 100 of the underlying stock at $55 and short-sold 100 shares of the same stock at $75. One counter-balances the other, but with a $20 difference in between.

Now here’s the trick – if you can enter the 4 legs of this trade for less than the difference in strike prices including brokerage commissions, then you can forget it until option expiration date when you will make a guaranteed profit.

Unfortunately, it is very difficult for retail traders to put a full box spread trade on and make any money. Floor traders can do it because they don't pay brokerage commissions and if they can buy it for less than $20 (in this case) they will make a guaranteed profit.

However, there are some retail traders who have “legged into” (i.e. put on each leg of the trade at different times) the box spread and done so in a retail environment. If your expiration dates are far enough away, giving you enough time to get the initial direction right, you can lock in profits.

Instead of having 4 option ‘legs’ which creates a regular "box", we're only going to have 3 legs. So taking the example we've been looking at, if we remove the ITM long call option from the equation and change a couple of the strike prices, we end up with a basic long 3 legged box spread.

So we're going to be: 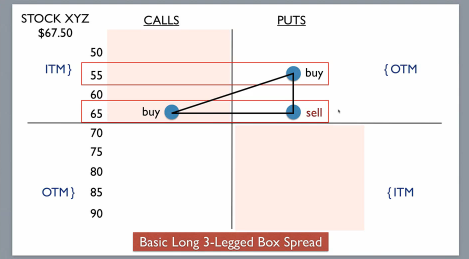 The above “long” three legged box gives us a predefined loss on the trade, which means we don't need any stops. It also satisfies our broker's margin requirements because we are not over-exposed to risk.

If this stock doesn't move, the sold $65 put will generate some theta premium for us. We essentially have a bear put credit spread alongside a long "at the money" call position. Let's take a look at the profit graph at expiration. 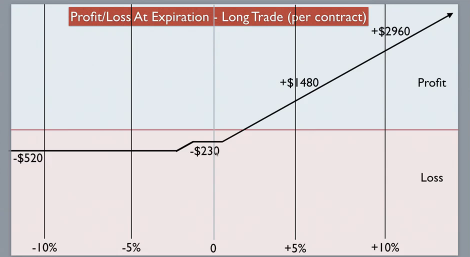 Once in a while, we will "hit the jackpot" when a news event or similar, causes a price spike in our favour. Sometimes the market will initially go against us but then will reverse and move in our favour. Using the 3 legged box, we have plenty of time for it to do so.

In this case, having taken off the OTM put options. We're going to 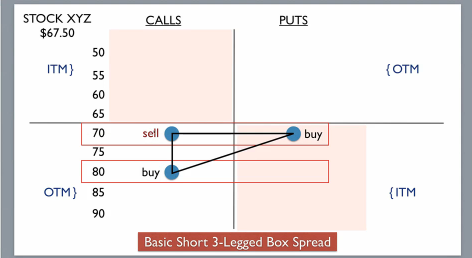 It's simply the reverse of the Long Three Legged Box spread previously described. 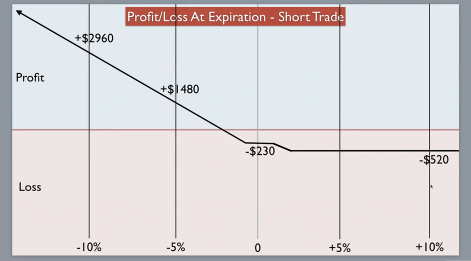 Looking at the profit graph again, a 5% fall in the underlying will realize a profit of $1480 while a 10% move will rewards us with $2960. If the price of the stock goes up instead of our anticipated downward direction, our maximum loss will be $520. If it goes nowhere, we lose a maximum $230.

All the above figures are based on using only single contracts. If you traded 2 contracts per leg, you would double your profit potential as well as your potential loss levels …. and so on.

Before entering a three legged box spread you have to know the kind of market you’re getting into, especially the historical volatility of the underlying stock or other financial instrument. You're looking for an underlying stock or commodity future that you believe will MOVE. You also need to choose a financial instrument that has a liquid options market for this to work.

Implied Volatility in the options can provide opportunities for variations in the strike prices you choose. You should also never use 2x or 3x ETF's. These are designed for day trading and can hurt you. You should also prefer stocks or ETFs that are trading in the $100 price range. This makes the 5% rule as outlined above much easier to calculate. Historically speaking, stocks in the $100 range are more likely to move the required 5% for this strategy to work effectively.

Typically, we would not hold a 3 legged box till expiration date. But we would choose options which have 6-9 months until expiration. This gives us plenty of time to be right and for the trade to profit.

If we can't get a favourable profit graph due to implied volatility being unfavourable, we can create a slightly skewed 3 legged box which converts the profit graph into something more favourable. In the end, you want to see a profit graph that looks appealing at expiration.

So experiment with strike prices and analyze.

Here’s another example of a three legged box taken on the DIA (“Diamonds”) ETF (which is based on the DOW Index). Notice the initial strike prices which are around the DIA when it’s trading at $170.50 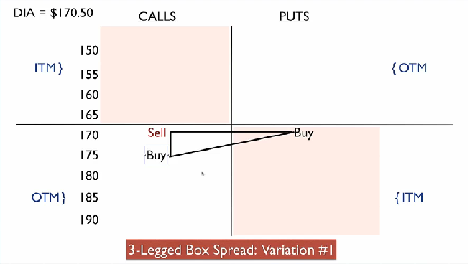 But due to the implied volatility in the options, we might choose to buy a 165 put instead of the 170. 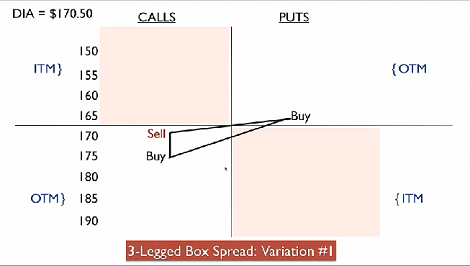 Here are some examples of stocks and ETFs that trade on the US exchanges, that work well with the 3 legged box spread: 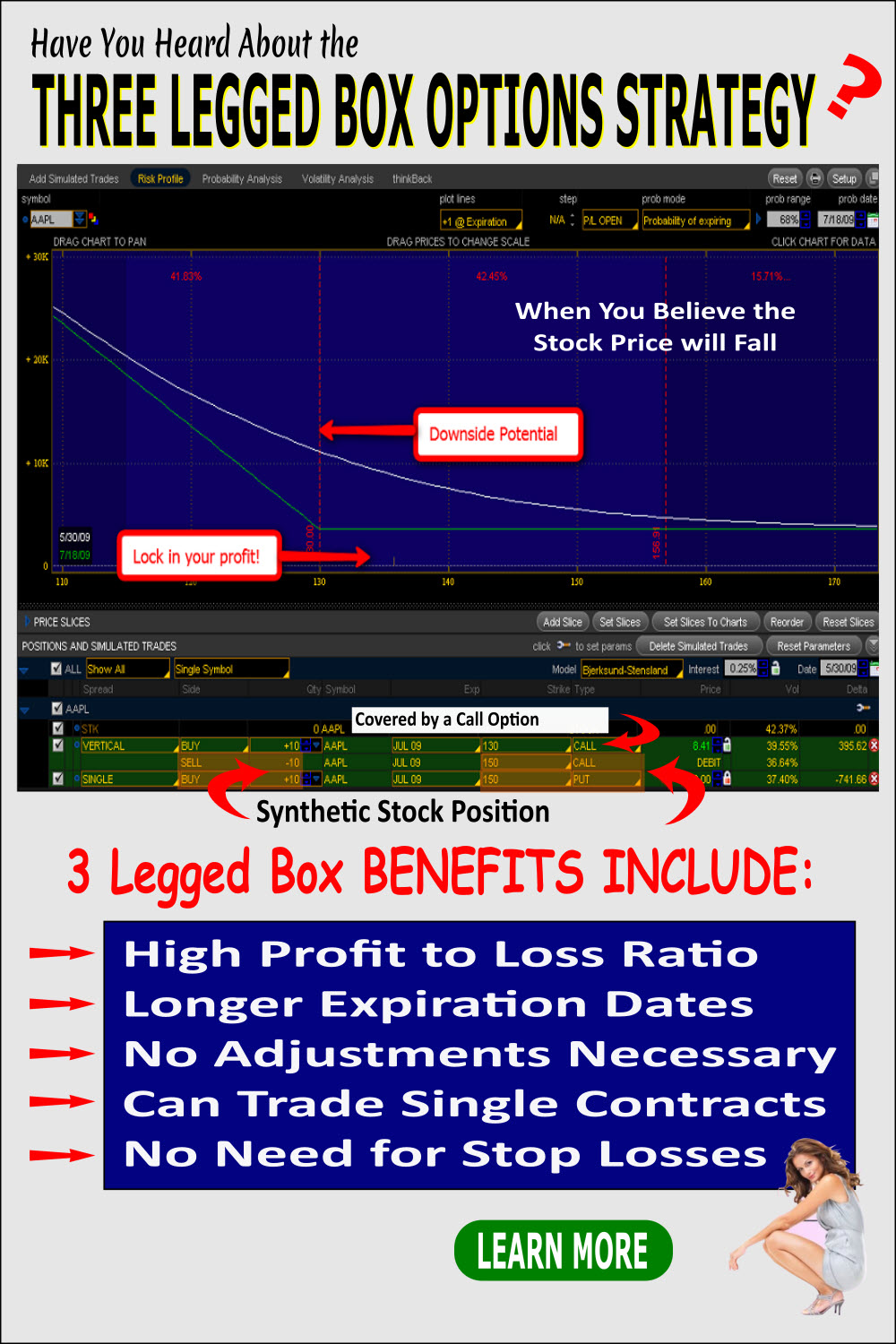