The main thing to remember with double tops and bottoms, is that they are located - and are most powerful  at the end of a rising or falling trend. They are in fact, well known as classic reversal patterns.

There is also a psychology behind this pattern which we will discuss, but first, let's look at a double top example on a chart. 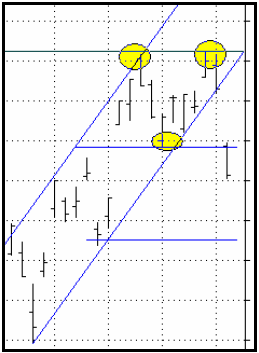 We can readily observe in this example that we have a double top at the end of a rising trend. We can begin to look for this pattern as soon as we see a change in direction. In our chart example here, that point is the top left yellow circle.

The next thing we look for is the low point, which in our chart is the middle yellow circle. From here on ... we will only consider it to be a double top if . . .  the subsequent rise respects the resistance level established by the left yellow circle.

If it breaches that level, then it is no longer a Double Top pattern and we reassess the situation for a possible continuation in the trend.

If the second resistance level (top right) is respected indicated by a reversal day which also breaches the up-trend line, you will need to decide whether to trade this on the basis that it is now in a potential sideways channel, or whether to wait and see whether the neckline (the middle yellow point) is to be breached.

Once the uptrend line has been breached, you should then consider whether there is enough depth between support and resistance to trade a sideways channel pattern, in which case, you might consider either purchasing at-the-money put options, or using a bear put debit spread, or a bear call credit spread with strikes above the top resistance level, on the assumption that the underlying security having broken the uptrend, is about to trend down to a support level.

If there is not enough depth in the potential channel pattern then you will have to wait for the breach of the neckline, supported by good volume, before recognizing the reversal.

In our sample chart above, the potential sideways channel pattern was eliminated as the first down session (second last bar) still respected the up-trend line and would not have been an entry signal. The next session (last bar on the chart) breached the neckline, confirming the Double Top pattern. This will eventually lead to a lower trough being formed.

We are looking at a trend reversal in the making. The lowest horizontal blue line below the last bar is the potential price target and since it is also at a previous support level, we have more validity for this expectation. 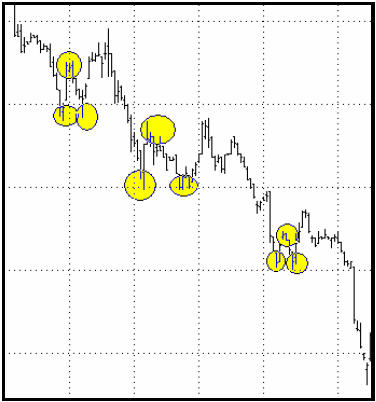 In the above chart we can see a great sample of several Double Bottom patterns that failed. This is the main reason why we do not pre-empt any trade but always wait for good validation. If you do not have a market move that is supported by volume, you could be entering a trade that will be short lived and your stops will exit you out of the trade fast.

The Relative Strength Indicator (RSI) is a powerful ally when trading double tops and bottoms. In particular, we refer to bullish or bearish divergence.

The Psychology Behind Double Tops and Bottoms

The process which leads to a double top, starts with the "bulls" driving the price up initially. After a while, the "bears" start coming in by forcing the price down. But following the pullback the bulls see a buying opportunity they may have missed out on, so they drive the price north again.

If the Bears create a trading price gap, this usually means that the Bulls are rolling over and leaving the market. So the Bears now have free reign until such time that the Bulls once again see a buying opportunity.

Double tops and bottoms are essentially an argument between the Bulls and Bears (i.e. Fear and Greed). Whoever wins will dominate this security's new direction.

When the scenario we've just described happens in reverse, we're looking at a double bottom. The down trending security finds support twice, then breaches the neckline to reverse direction so that price action goes north.

There will be times when you will see a breach of the neckline on double tops and bottoms, but with poor looking sessions. For example, the open and close of the session is not in the opposite third of the bar or candle.

If you add lower volume to these apparent breakouts  then beware - they may only be short lived and not produce the desired target but in fact, turn around and retreat back within the sideways channel.

There will be times when you can observe double tops and bottoms in mid-trend and that is why we must always wait for validation prior to placing a trade. The following sample chart of mid-trend patterns has been provided to show you that they do not always mean a trend reversal but quite the opposite - a strengthening of the trend. 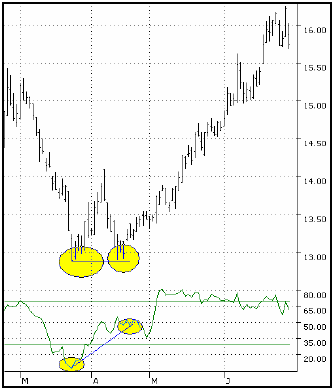 Looking at this chart and noting the RSI trend at the bottom, we can see the additional evidence for a double bottom reversal, by a strengthening of the RSI indicator.

If we observe an increase in the RSI between the two bottoms, this indicates divergence and provides extra validation that a reversal may be imminent. The same goes for a double top, only the RSI would decrease over the two tops. It is especially good if the first RSI peak was above the 70 level.

So now that you know all about Double Tops and Bottoms go ahead and trade options with confidence! 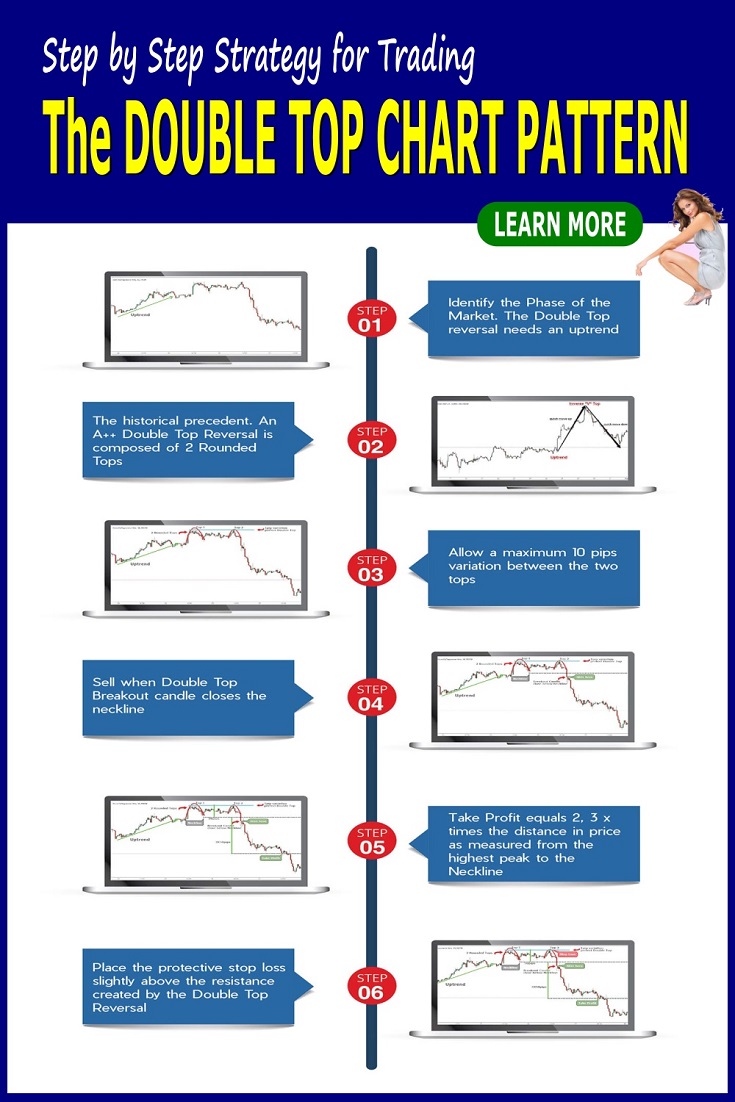