When speaking about rolling credit spreads we need to divide the general concept into its two variations, namely:

Rolling out as a standalone concept, refers to extending the expiration dates on your credit spread positions to a later month but with the same strike prices.

Rolling up/down describes the same thing but with an additional element of adjusting the strike prices up or down (as the case may be) in the process.

For our purpose here, we are only going to focus on rolling credit spreads up or down, in other words, adjusting your current positions, using the SAME expiration month but now with different strike prices.

Rolling credit spreads can be a vital component to ensuring that existing credit spread positions do not become unprofitable. You can also apply what you're about to read to more exotic strategies such as Iron Condors which are, in fact, double-credit spreads facing different directions with strikes that are some distance apart.

In fact, the additional feature that Iron Condors have over credit spreads is that only ONE side of an iron condor can become unprofitable. This means that when you adjust the losing side, you can take in additional profit by also adjusting the winning side in your favor.

Iron Condor adjustments are one of the strategies taught in the very popular Trading Pro System.

But continuing with rolling credit spreads for monthly income, we need to cover a couple of matters that will affect your adjustment decisions.

One of the advantages of credit spreads is that options time decay (Gk. 'theta')  works in your favor. So the passing of time will make a difference to how and when you decide you need to adjust your position.

For example, if you had only put your credit spread on less than a week ago with 45 days to expiration and the underlying price suddenly moved against you, time decay would be of little advantage to you.

But if your credit spread had been in play for three weeks out of an original 30 days to expiration and the price moved against you, time decay would play a much larger part.

When stock prices move, the implied volatility in options prices can also increase and this may impact the result of rolling credit spreads.

If out-of-the-money option strike prices which are now closer to the current price of the underlying become more expensive due to increased implied volatility, it works in your favor and sometimes can even allow you to adjust your position and take in more credit than you took for the original position.

Alternatively, it may extend the amount by which the underlying has to move from your original entry price before you can adjust without losing potential profit.

When rolling credit spreads there is one simple rule which you need to know to ensure you keep your profits. When you placed your original credit spread you would've received of course, a net credit to your account.

You also want to close out your original credit spread for a maximum double the cost of the premium you received and at the same time, be able to enter a new one at strike prices that will give you a new credit for at least the amount of your original one.

So if you received say 58 cents for your original spread then you want to ensure you get at least 58 cents for the new spread at the new strike prices.

This is feasible when the underlying has moved closer to those new strike prices. But with the passing of time, theta decay will erode your ability to do this. So rolling credit spreads should be made as early as possible during the option expiration cycle.

You don't want to leave it until it's too late!

Bearing this in mind, the issues of time decay and option volatility as noted above, will affect the timing of your decision. There will be additional brokerage costs of course and if this is an issue for you, you may wish to adjust at around 45 percent loss on your original position.

If you do adjust too late, you will not necessarily lose money but you will reduce your potential profits. If you can't get the same amount for your new credit as from your original one then you may want to consider rolling out to a later expiration month.

When adjusting positions, always pay attention to the option greeks and in particular, the delta and the vega. When using Iron Condors, your new adjusted position should include a new options delta number that should be as low as possible - preferably below 100.

Rolling credit spreads is all part of the art of adjustments - that vital ingredient that makes all the difference between successful and unsuccessful option credit spread trading.

If you're interested in further exploring this concept, there is an excellent series of online videos which demonstrate exactly how this works, including in depth information about using the "greeks" and recommendations for the best and safest underlying financial instruments to use. 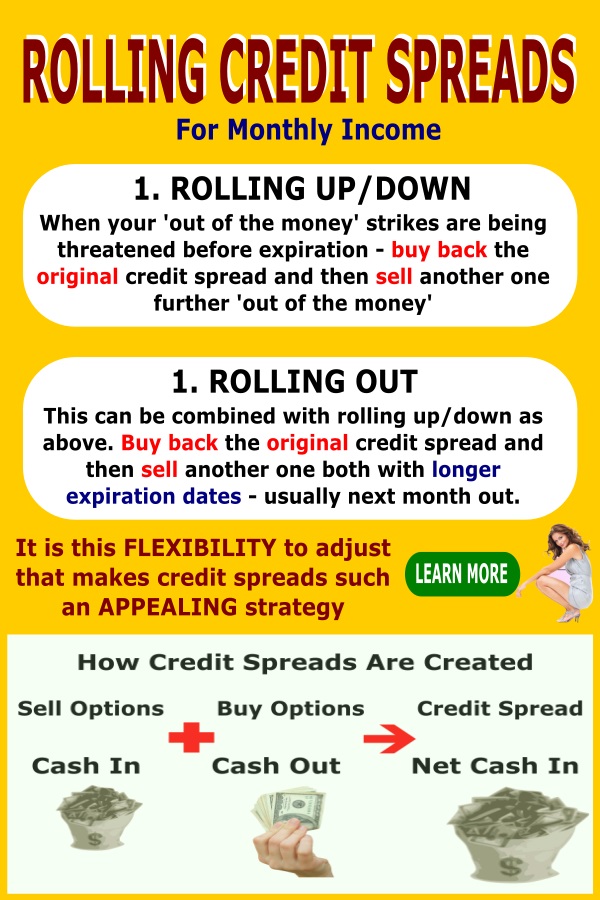