Ratio Backspreads - For Stocks on the Move - Up or Down, Doesn't Matter

Ratio backspreads are considered to be one of the safest longer term option trading strategies available today. So much so, that they have sometimes been called "vacation spreads" because you can literally take a holiday and come back later to find they've made a profit for you.

This doesn't make them risk-free. They are designed to take advantage of stock prices that are "on the move" over the longer term and which you expect to have breached certain price levels within the next few months.

The diagram below illustrates the point. 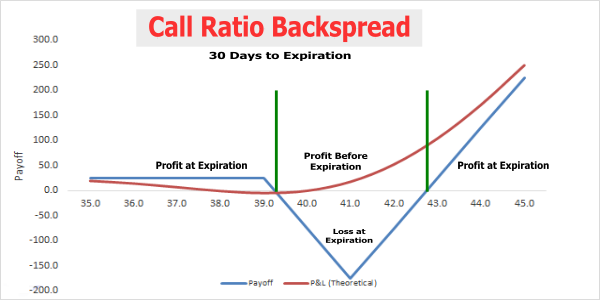 The word "ratio" in the strategy gives us a clue to how you would structure ratio backspreads. There is a relationship, or ratio, between a combination of bought and sold positions which open the trade. Usually, it would be something like 2 to 3 - i.e. buy 3 and sell 2 - hence, the ratio.

In order to understand what we are about to say, it is assumed you are familiar with the meaning of the expressions "in the money" or "at the money" as it applies to options.

The idea is that you:

The greater number of 'sold' options positions should cover the cost of the 'bought' ones and then some, ideally bringing a credit into your trading account.

The beauty of ratio backspreads is, that even if your view of the stock price direction is wrong, you can still make a profit. This is due to the fact that the deeper the underlying stock price goes "into the money", so the "delta" component of all positions increases, until it reaches a point where all positions have equal delta.

The delta is the relationship between the movement in the price of the underlying stock and its associated option.

So if you have taken out a put ratio backspread and the stock price declines as anticipated, the 3 "bought" (or 'long') out of the money put option positions will theoretically increase in value exponentially, once their strike price has been breached, up to the same 1:1 rate as the underlying stock price movement.

Meanwhile, the lesser number of in of the money 'short' put positions will also increase in value, but not at the same rate as your long put positions. Since you have more "bought" than "sold" positions, you're now making a good profit.

However, if the price action of the stock goes north instead of south, the "bought" positions will lose money, but so will your "sold" positions.

If you created your ratio backspread with strike prices that are not too distant from each other then your 2 at (or in) the money "sold" positions should more than cover the cost of your 3 "bought" positions, so that you started the trade with a net credit.

So even if the price action of the underlying goes against you, you will get to keep this initial credit to your account and so, still make a profit, even if a smaller one than you hoped.

The other factor contributing to the above is the "implied volatility" (IV) of option prices. If we have taken out put ratio backspreads and the stock price takes a dive, this generally leads to an increased implied volatility for our 3 "bought" put option positions and consequently, will enhance the profitability of the trade, since we bought them "at the money" while the 2 "sold" positions were already "deep in the money".

The best time to enter this type of trade is when the "at the money" options that you're going to sell short, have a higher implied volatility than the "out of  the money" bought options. But if they're close, that's just almost as good.

Knowing the above, you can sometimes combine both call and put ratio backspreads for one simultaneous position. You should receive a credit for each of the setups.

In order to profitably enter such an an arrangement however, you need to take into account broker commissions, due to the large number of positions involved - and also ensure there are no volatility spikes for any of your option strike prices.

The ratio backspread is one of the more advanced option trading strategies, in that it allows a trader to have limited risk while realizing a nice profit if the underlying price moves in the anticipated direction. The bigger the move, the more profit you make, so you should look for stocks where you think the price will move significantly, such as the support or resistance levels  of a channel pattern, or close to the apex of a triangle or wedge chart pattern..

As a general rule, the shorter time to expiration, the closer you would want your strike prices to be. Be sure to construct a risk graph before entering the trade so that you understand your risk vs reward. 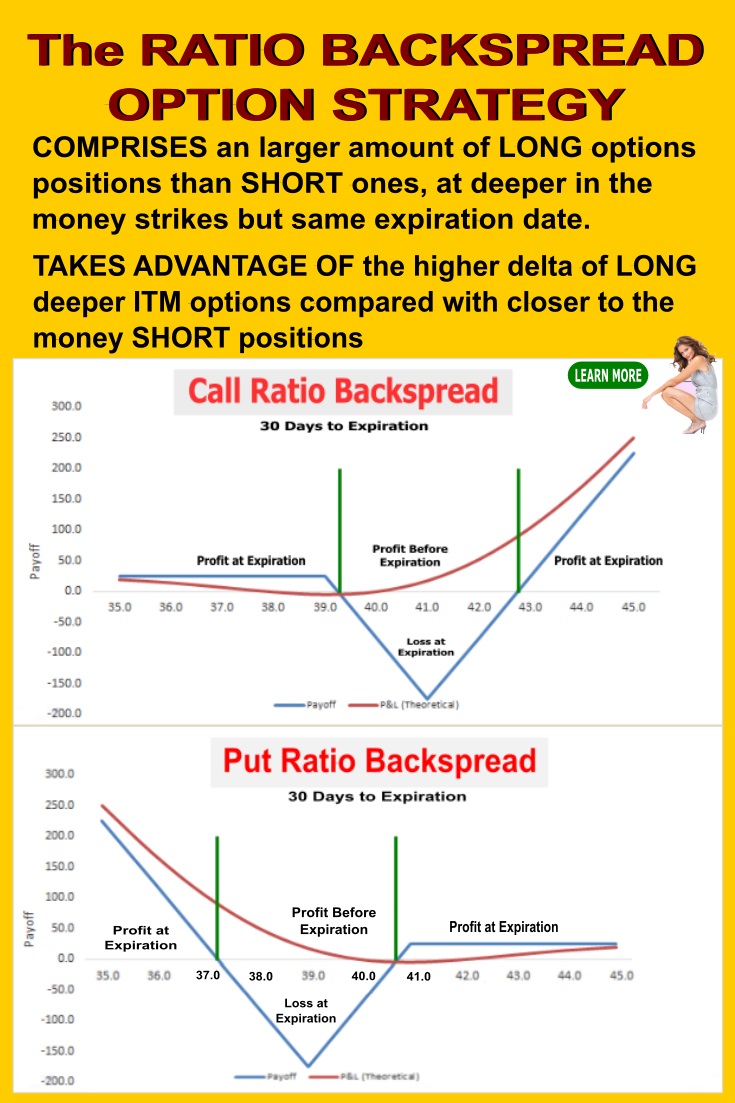