The term "LEAP option" describes an options position with more than one year until expiration date. The acronym LEAP stands for "Long-term Equity Anticipation Securities. It gives the buyer the right, but not the obligation, to buy an underlying security (stocks, futures, currency) at an agreed price, up until expiration date.

Because LEAP options have a long time until expiration, investing in them is less likely to hurt you financially in the short term. But there are a few tricks you need to be aware of before taking the plunge.

If you are considering a LEAPS covered calls strategy, the best options to buy for your long position are deep-in-the-money options. The reason for this, is that we want to purchase options whose pricing component is mostly intrinsic value rather than 'time value'.

Time value, or 'theta' if you think in terms of 'the option Greeks' is a component built into the pricing of an option that, for long positions, works against us with the passing of time. This "time decay" factor operates at a much slower rate for long dated options, but it is still a threat nonetheless.

So by selecting 'deep in the money' LEAPS, we reduce the risk that our long call options position will go out-of-the-money.

A general rule of thumb for leaps covered calls strategies would be to purchase your LEAPS options at a strike price that is AT LEAST 10 percent in-the-money. In other words, the underlying stock can fall by 10 percent of its current trading price before our call options go 'out-of-the-money'.

For example, if the underlying share price at time of purchase is say $30 then you would look at LEAPS option contracts that are at least $3 in the money - preferably more. So you look at strike prices at $27 or less.

The further in-the-money you go, the higher the option price will be, but these options will also have more 'intrinsic value' (real value) due to a greater delta (another option Greek).

But here's what makes them attractive - the cost of these LEAPS options will probably be only about 20 percent of what you would've paid if you had purchased the shares themselves. This will free up more capital for other Leaps Covered Calls positions and therefore more potential profit.

What to Do Next

Once we have secured our LEAPS options contracts, the next thing you do is sell (write) near-month call options at a strike price at, or next one below,  the current market price of the stock.

Once this is done, taking our $30 example above, three possible outcomes await you:

1. The stock is below $30 at near month expiration date. The sold options will expire worthless so you keep the premium and then sell the next month options for more premium.

2. The stock price is slightly above $30. We then buy back the sold calls, possibly for less than we received and immediately sell more call options at a higher strike price for the next month out, taking a profit.

We will then be exposed by $5 per share, meaning that we will be forced to sell the shares at $30 when the market price is $35.

But at the same time, we hold our now 'deeper-in-the-money' LEAPS call options which "cover" our short position and are now much more valuable.

In this instance we close out both positions, making an excellent profit on the long LEAPS calls. We will lose a little on the sold $30 options, because we have to buy them back for more than we sold them, but this will be more than compensated by the profit on the LEAPS calls.

So we take an overall profit.

Our LEAPS covered calls strategy will only be threatened if the underlying stock takes a huge price dive and falls below our long dated strike price.

So if you're a more conservative trader and this possibility troubles you, you may choose to sell in-the-money call options instead of at-the-money for your short dated positions. You will receive less profit because they will provide less time decay advantage, but should the price fall dramatically, the larger short premium received will help absorb the effect.

Another alternative would be to protect your deep IN-the-money LEAPS call options with an equal number of way OUT-of-the-money put options at the same strike price as your LEAPS calls.

Because these puts are 'way out of the money' they should be very cheap, particularly if they are near-month options. It will reduce your overall profit slightly but will give you peace of mind if disaster strikes.

Since these protective puts are really cheap, you may even consider buying more of them than your LEAPS call options, giving you even more protection.

From another perspective, this combination of long-dated bought calls and short-dated sold calls has another name - the Calendar Spread. 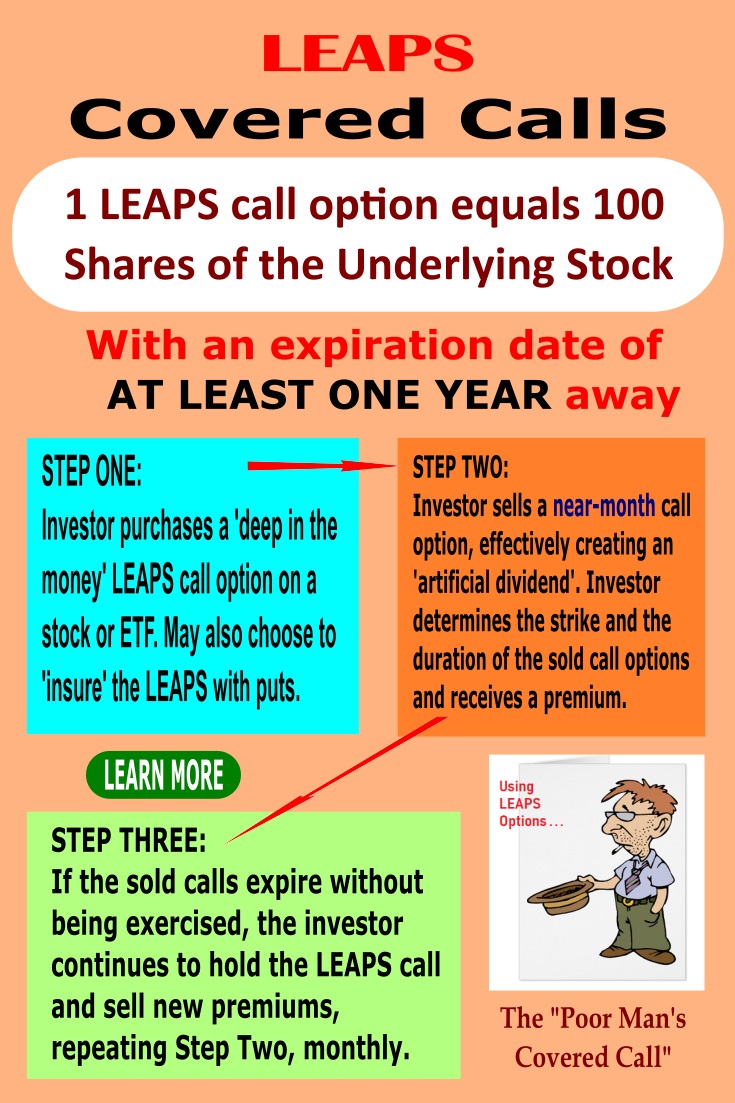