Candlestick Patterns and What They Mean

The most effective way of understanding candlestick patterns and what they mean, is to first divide them into their three main categories:

In addition, it's important to remember that once we understand the candlestick patterns basics, we don't want to confine ourselves to using them as a standalone method for stock chart analysis. The most successful price action prediction outcomes combine what candlestick patterns mean with some other key elements that affect price, such as support and resistance levels, particularly on higher time frames, and trend lines.

Putting these together, we can be confident that we have a candlestick patterns strategy that will serve us well and produce many profitable trading opportunities.

Candlestick chart patterns work best on daily charts because the price action during this period contains a lot more data to work with. This doesn't mean that they can't also work on shorter time frames and you'll find a number of articles or videos to that effect. However, the examples and comments that you're about to read are all based on daily candlestick charts. At the end of the day, the candlesticks tell a story.

Over time, individual candlesticks form patterns that traders can use to recognize major support and resistance areas. There are a great many candlestick patterns that indicate opportunities within any given market. Some provide insight into the balance between buying and selling pressure, while others identify continuation patterns or market indecision.

Bullish patterns form at the end of a market downtrend and signal to the trader, that price movement is about to reverse direction. When you see these signals, you should be thinking about strategies that will profit from an upward trajectory in the market.

The Hammer candlestick pattern comprises a short body with a long, lower wick and is showing us that although there was selling pressure during the day, this was then cancelled out by strong buying pressure that drove the price back up. A green hammer, where price closes higher than the open, is a stronger signal than a red hammer, where prices closes lower than the open. 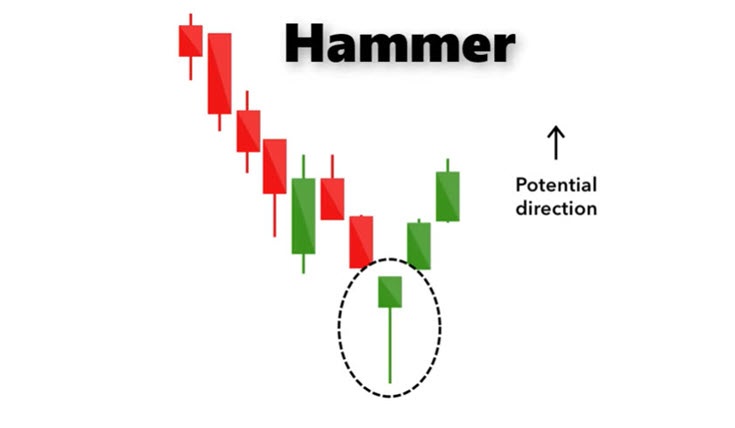 The Inverted Hammer is a similarly bullish candlestick pattern to the above mentioned Hammer, the only difference being, that the upper wick is long while the lower wick of the candle, is short. It indicates buying pressure, followed by a selloff that wasn't strong enough to drive the market price down. It tells the trader that buyers may soon have control of the market. 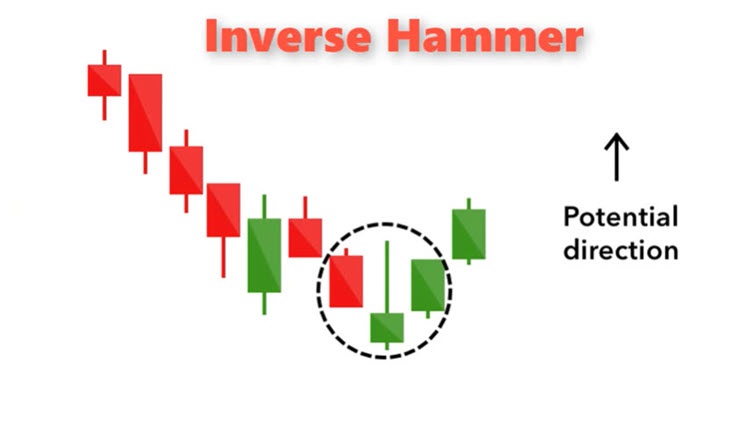 This is a combination of two candlesticks. The first candle has a short red body that is completely engulfed by a larger green candle. Even though the second day opens lower than the first one, buyers push the price up, culminating in the buyers being victorious. Traders should expect this momentum to continue. 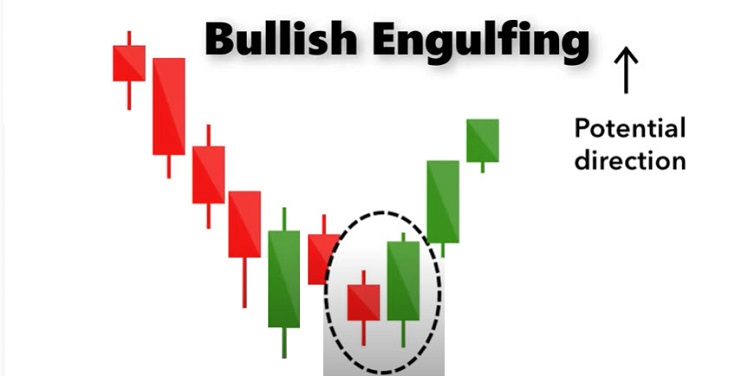 The reason why it is called a "piercing line" is because that "line" in question is the mid-price of the first candle. To qualify as a Piercing Line pattern, the second bullish candle must push price up to above a level that is 50 percent of the first candle. 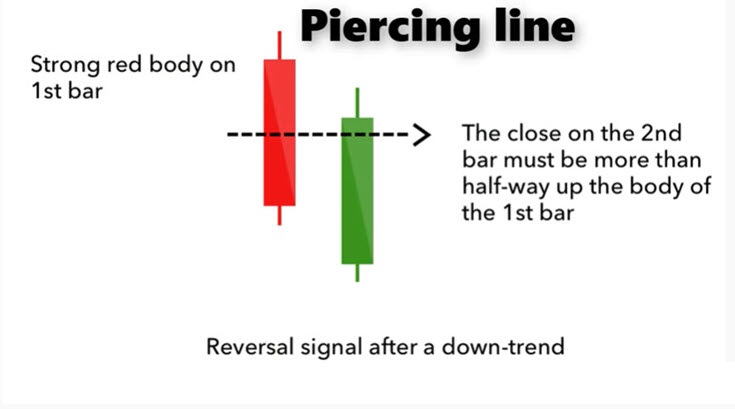 For it to be a "Morning Star" the body of the small candle should not overlap the bodies of the two larger candles on either side. The best Morning Star patterns occur when the body of the third candle is higher than that of the first candle but this is not essential to the definition. Sometimes, a short pause follows and then price continues upward. 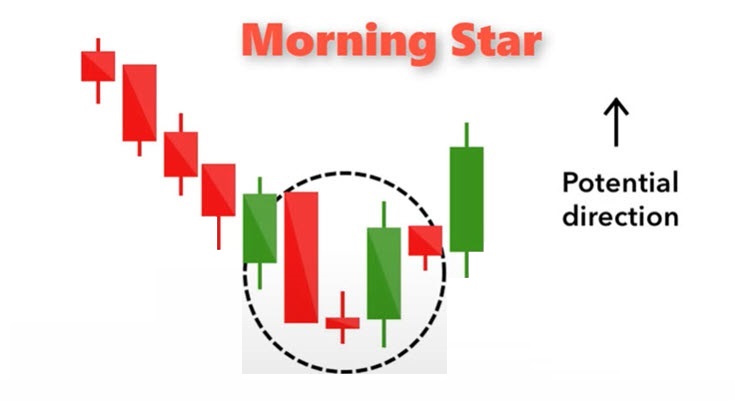 This pattern occurs over three days and consists of bullish green candles with small wicks, each of which closes higher than the previous day. This is a very strong bullish signal that signals the reversal of a downward trend. 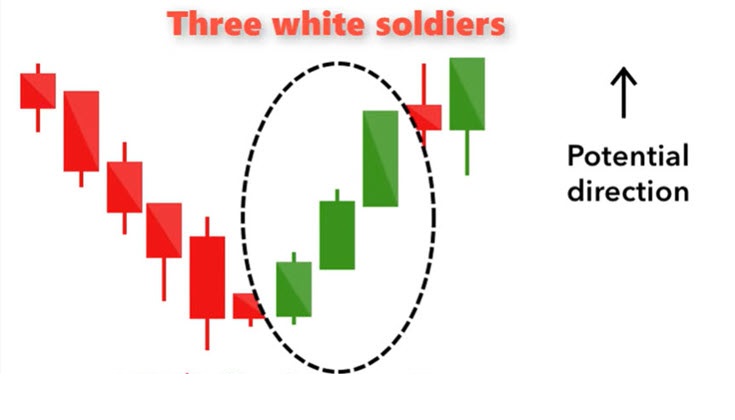 These bearish candlestick patterns form at the end of an uptrend and signify a reversal to lower price action. They are most effective when confirmed by resistance areas, such as major resistance levels on higher time frames, the top of channel patterns, or protruding out of and then withdrawing back into the top of wide volatility Bollinger Bands.

The Hanging Man is the bearish equivalent to the bullish Hammer. Looking at the image below, you can see why it's called that. It indicates that there was a significant sell-off during the day, but that buyers were able to push the price back up again.

However, the large sell-off is an indication that the upward momentum is declining and we're in a period of indecision. A bearish candle that follows will confirm our belief that either a reversal or short term pullback is on the horizon. 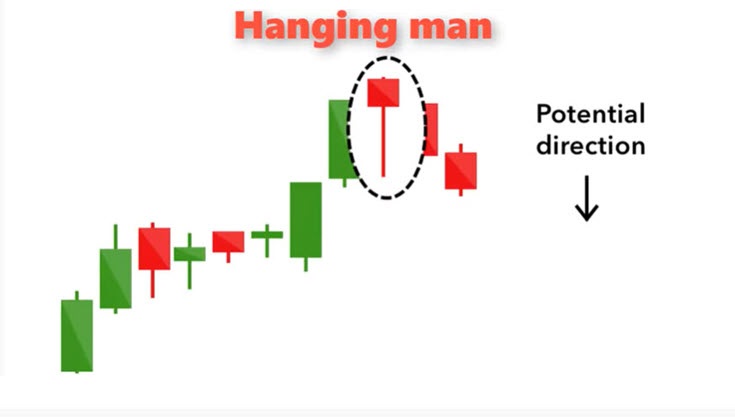 The Shooting Star candlestick pattern is the reverse of the Inverse Hammer and forms at the end of an uptrend. It has a small lower body and a large upper wick. It's called a "shooting star" because price will rise during intraday trading but later, will reject the highs and fall back to the ground. 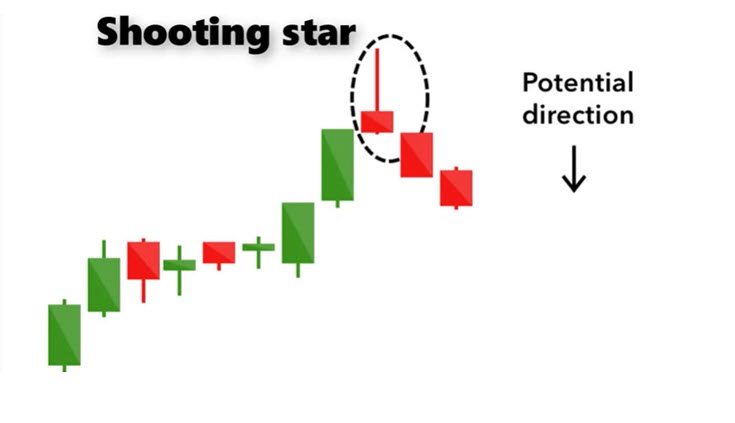 This candlestick pattern occurs at the end of an uptrend. You'll see a small green (bullish) body which is then engulfed by a long red (bearish) candle. This indicates a peak, or slowing down, of upward price trajectory and foreshadows an impending reversal or pullback. The stronger the second red candle is, the more significant that a continuation downwards is likely to be.

Unlike most other patterns discussed here, the Evening Star is a three star candlestick pattern and is the opposite of the bullish Morning Star. When you observe a small green candle sandwiched between a long green candle and a long red candle, then you know that you're looking at an Evening Star.

It is confirmation of a bearish price reversal or pullback and is especially so when the third, i.e. red, candle closes lower than the open on the first candle. 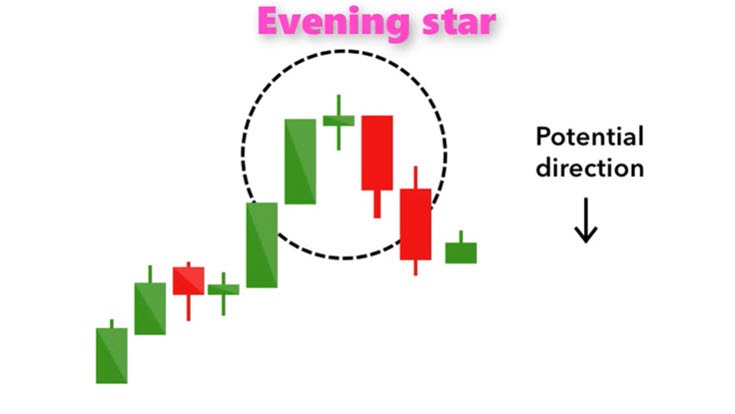 This candlestick pattern comprises three consecutive bearish red candles that have either very small or non-existant wicks. The close of the previous day is virtually the same as the open of the next day, but each day, the price descends lower and lower. Traders interpret this as the beginning of a new downtrend. 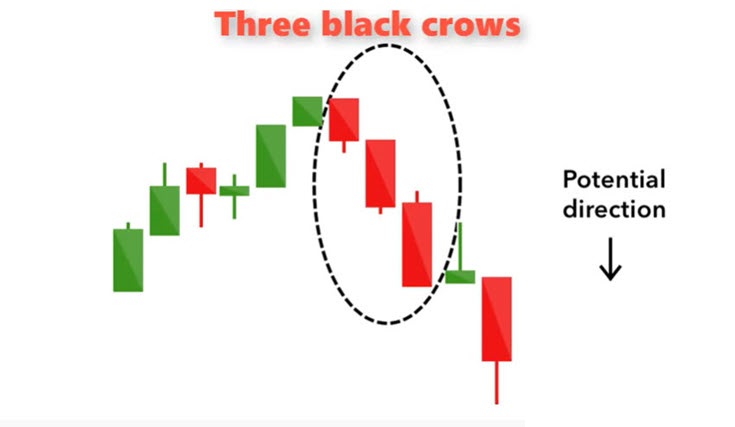 This pattern tells you that a bearish reversal is underway. The bullish green candle optimism of the previous day is overshadowed by a red bearish candle that almost engulfs it, but not quite. It closes below its mid-point. If the wicks of the second candle are short then you know that the bearish reaction to upward price has been decisive. 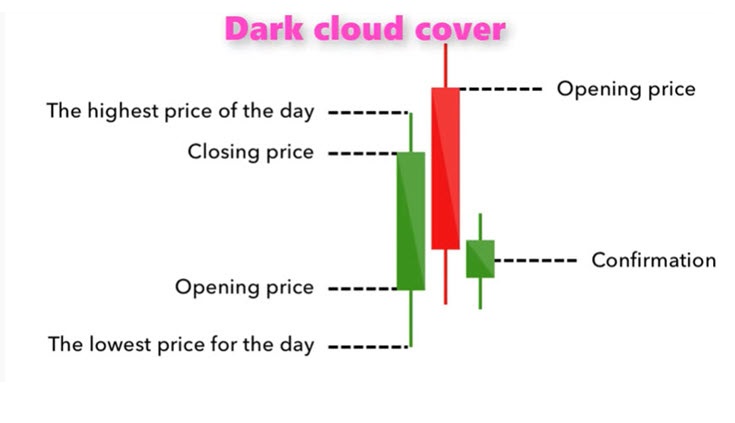 Whilst the patterns that we have been looking at so far, are reversal patterns, the following indicate a short period of rest in the market before price continues in its original direction.

When price action in one day (or other period) has a very narrow range and almost closes where it opens, so that the candle resembles a small cross, you're looking at a Doji. These candles typically have a short, to non-existent, body, but the wick size may vary. It indicates a struggle between buyers and sellers which results in indecision as to which way price action should proceed.

You will observe the Doji as part of the Morning and Evening Star candlestick patterns, but when they appear alone, they're a neutral signal and more likely showing us a pause before price continues.

If you see a few Doji-like candles consecutively following each other at an extremity, followed by a price breakout, then you should consider this to be a breakout from price consolidation which, if at or near the touch of a trendline, can be very powerful. 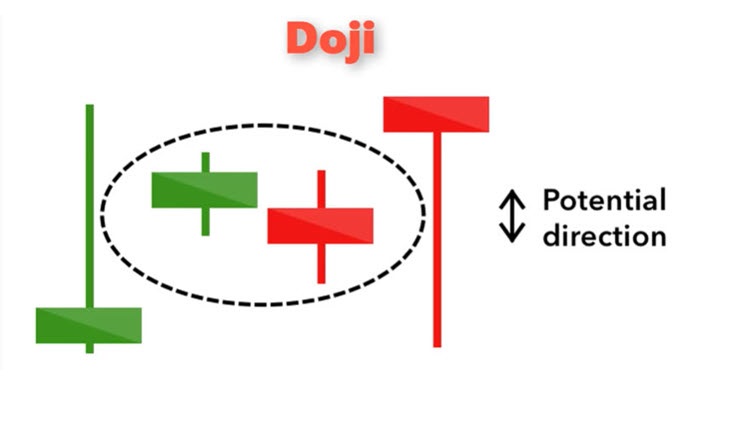 The Spinning Top candlestick pattern has a short body which appears between wicks of equal length. It's telling us that the market is indecisive. The bulls and bears have equal strength.

If you see a few of these Doji-like candles consecutively following each other at an area which your analysis tells you involves a decision point, such as near the touch of a trend line, followed by a price breakout, then you should consider this to be a very powerful signal that price action will continue in the direction of the trend line. 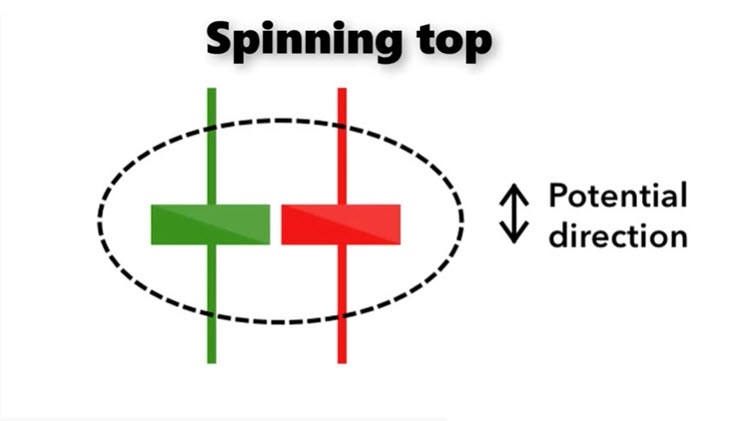 This involves three consecutive green bullish candles which move in the opposite direction to the prevailing down trend before price continues downward. On either side of these three candles, you want to see two strong bearish candles with long bodies and insignificant wicks.

You also want to see the three green candles contained within the range of the two bearish candles. It means that the bulls didn't have enough support to realize a price reversal, so expect a downward price trajectory from here. 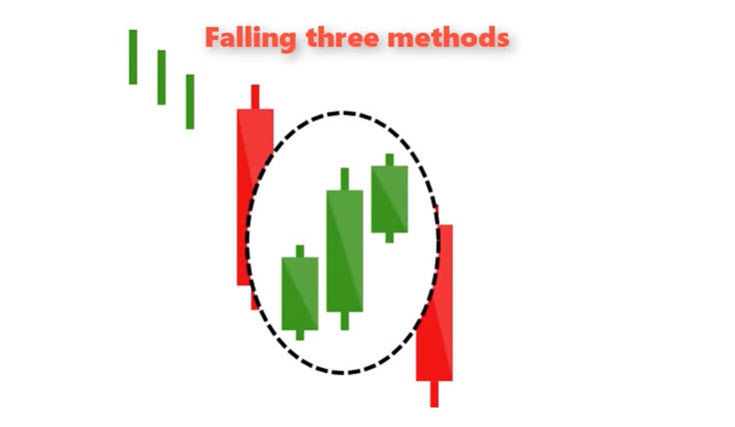 This pattern is the opposite of the one directly above. Again, you're looking for three red candles contained with the range of two decisive green candles. They indicate a short pause in the market before price action continues upward. 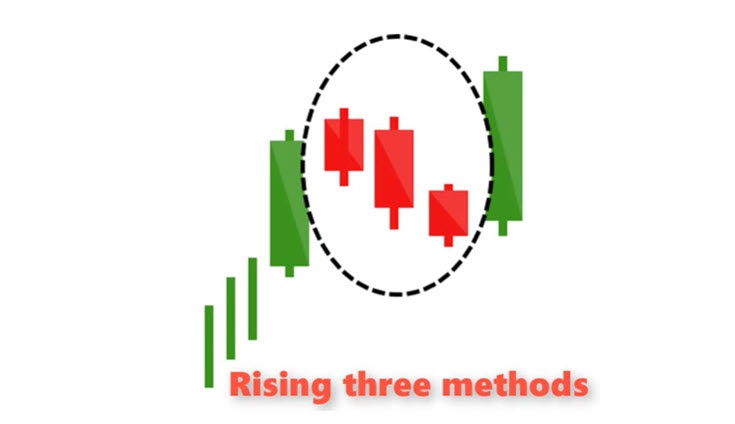 Now that you have a good grasp of candlestick patterns and what they mean, this would be a good time to practice recognizing them by going back over some stock or forex price charts and highlighting them. Observe where they work best and under what conditions. Then you can formulate your successful trading plan.

Remember, successful trading is not about winning every time. It is about placing the odds as much in your favor as possible. After that, it's just a numbers game.